The world’s top triathletes competed on a challenging course, some for the first time in more than a year.

CHALLENGEMIAMI served up a thrilling show as some of the world’s best triathletes battled it out on a 78.7 kilometre course at CHALLENGEMIAMI, including Jan Frodeno, PTO rank number one in the world, who hadn’t competed since October 2020, and took home first place in the men’s Pro Race.

The world-famous motor racing circuit delivered a COVID-19 safe race with the 1.5km swim taking place in the lake at the centre of the circuit, a 60.3km bike and a 16.9km run around the iconic Homestead-Miami Speedway® track.

Jodie Stimpson won a thrilling battle in the women’s race managing to hold off number two in the world, Lucy Charles-Barclay who suffered a two minute penalty from passing on the left instead of the right. Coming in at third place was Hering, fourth Sarah Perez Sala, who had a lead in the race for quite some time, and fifth Skye Monech.

Jan Frodeno, CHALLENGEMIAMI Champion and number one in the world, delivered a 02:37:57 time. Chasing right behind him was Lionel Sanders, who had an impressive  02:40:28.0 time. Bringing in third place was Ben Kanute, fourth Chris Leiferman, and fifth Rudy Von Burg.

After Jodie Stimpson crossed the finish line she said, “Such a hard hard race. Hard on the body and hard emotionally today. This is for Dad and it’s going to continue to be in his memory. He’s keeping me going and will continue to keep me going and I have the support of my mom here with me today. That was definitely at the forefront of my mind all the way through today.”

Jan Frodeno shared his opinion on CHALLENGEMIAMI in an interview with Bob Babbitt:

“It was legendary getting here. This course is genuinely fun. Star studded field. I hear the word game-changer so many times and I’m like, just anybody just come close to even thinking about changing the game, really just do it! Very often, it’s just ideas that are warm ups. Whereas here, I have been more than positively surprised… Quite frankly this kind of course I’ve seen here this morning and the whole facility, made me realize that this is definitely a super cool future part, especially for pro racing to showcase the sport and make for exciting racing. I think this actually could be a game-changer.”

Over 1,400 Age Group athletes also participated in a fabulous weekend of racing.

“For our inaugural Miami race, witnessing Jodie Stimpson’s well deserved emotional win, having Jan Frodeno with us, his first race in 517 days and, followed by two days cheering for the age groupers at the start and finish, hand delivering a few freshly minted Pro Cards, the energy at CHALLENGEMIAMI will be hard to beat,” said William Christy, CEO of CHALLENGENORTHAMERICA. “At CHALLENGENORTHAMERICA, our execution standards are high to deliver the best athlete experience. We took a sport to a mass media coverage perspective, and together with the athletes delivered a wildly exciting show for both the athletes, fans and new fans who are just discovering triathlon. We proved we’re expanding our race offerings with Miami, and we’re going to do it all again and again.”

The fast and furious Pro Race was live-streamed via CHALLENGEMIAMI’s Facebook page, with a NASCAR look and feel. The Age Group Sprint, Middle Distance, Kids Races and Pro Am Races were also live-streamed and are available for replay both on Facebook Challenge Miami and Youtube.

Find results of both Pro and Age Group Races here.

For details on how to stream the Pro Race Highlight Show, click here. 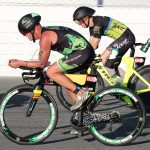